About a month after I got my first banjo I went up the mountain to the Alleghany Jubilee in Sparta, North Carolina, to hear Benton Flippen and The Smokey Valley Boys play for the dance. I always traveled with my banjo behind the seat of my pickup truck. After I got set down, waiting for the band to start playing, Benton and his mandolin picker, Grey Bryant, walked up to me and Benton said, “Kevin, you bring your banjo?” I said, “Yes, it’s out in the truck.” Benton said, “Go get it, I need a banjo picker.” I told him, “Benton, I ain’t good enough to pick with you,” and he said, “Well, you got to learn somehow.”  He must have known I had some potential because I had been to his house a couple times before, trying to learn how to play. I went to the truck and got my banjo and I stood up there, half-scared to death, beside my musical hero for 3 hours trying to learn the tunes as Benton played them.  He said, “There’s no better place to learn than playing a square dance.” And to this day this has been one of the highlights of my music-making career.

Benton, and his wife, Lois, had always been special folks to me, like other grandparents from the first time I met them. Benton and Lois were always together, where you saw Benton, Lois wasn’t far behind. Lois fell ill in December 2006, and Benton vowed to never play the fiddle again. I told him he had to play because she would want him to keep playing and he felt like he couldn’t do it. Sadly, Lois passed away  on February 28, 2007.  A couple of weeks went by and Benton called to tell me that his roof was leaking around the chimney and I told him I’d be right over to fix it.  After I fixed the roof leak, Benton said, “What do I owe you?” and I said, “A fiddle tune.” He said, “Kevin, I can’t do it. I’ll never strike another lick on the fiddle.” I said, “Benton, that’s my pay.” He said, “Well, all right, I’ll get my fiddle and banjo.” So we set there and played for over 2 hours that day, and after a couple tunes, he thanked me and said that this was the best therapy for him.

Exactly one week before Benton passed, on June 21, 2011, I went over and carried him some green beans, cornbread and cake that my grandma had fixed for him. We sat there and talked for over an hour, and I made it a point not to bring up music because I knew he had not been playing for the past several weeks because he hadn’t been well. Soon the conversation turned to music when he asked me if I had been playing the banjo much, and then said, “How about let’s strike up a tune?” He told me to get his fiddle and banjo out of his cedar wardrobe in the bedroom, and we sat there and played for at least a hour and a half. In between tunes, something just told me to tell Benton how much his friendship has meant to me over the years, and also for being the first person to get me interested in playing music. Little did either of us know, he wouldn’t be here one week later.  I never would have thought when he had me to put his fiddle back in the case it would be the last time he would play it. I am a very blessed person to have had Benton and Lois Flippen in my life. 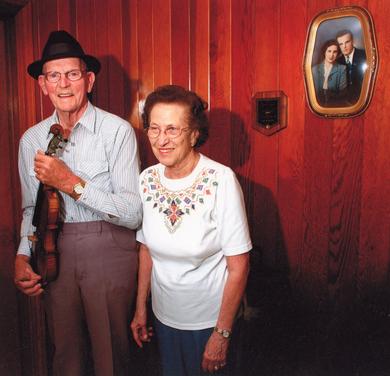