History of Round Peak Music
Round Peak music is a regional style of old-time string band music that originated in the northwestern corner of Surry County, North Carolina, and is still played by the old-time musicians who live here, as well as others all over the world who have studied the music. ‘Round Peak’ simply refers to the community of Round Peak where the music flourished.

Music was very important in the Round Peak community during the mid-1800s and throughout the 1900s. Music was this community’s main form of entertainment, keep in mind at this time they didn’t have television, video games, computers and the Internet to busy themselves with. Life was hard and music made people’s lives easier by providing an escape from the hard days of work around the farm. Often in the evenings after the work was done, people would walk, ride horses, or later drive to their friends’ homes to play music and dance. Also at certain times of the year, people had bean-stringing, corn-shuckings, barn-raisings, molasses-makings, and other kinds of work events in which the community came together to help one another get work done. Then, once the work was finished the musicians would play and the dancers would dance. Sometimes people would just have a frolic, or party, at their house and take the beds down, and move the furniture out of the house, and the musicians would play in the doorways between the two rooms and people would dance in both rooms.

Another notable event occurred at Christmas, called ‘Breakin’ Up Christmas.’ During this time of the year, people would go around to a different home in the community each night and they would play music, dance and make merry. This celebration began a few days before Christmas and continued through the New Year until ‘Old Christmas’ on January 6th.

Popular Round Peak Musicians
Round Peak music was popularized by musicians such as Tommy Jarrell, Fred Cockerham, Earnest East, G.F. Ronald Collins, Paul Sutphin, Verlen Clifton and Kyle Creed, who had the opportunity to travel outside the area during the 1960s and 1970s to perform at colleges, universities, and folk festivals throughout the United States. This exposure through the Folk Music Revival helped make Round Peak known as a regional style. Many people were fascinated by these musicians and were drawn to this particular style of music, so much so they came to the area to visit the musicians and learn the music. The Camp Creek Boys is the most well-known Round Peak old-time string band.  Although, I do very highly respect the music of the late Benton Flippen, he did not consider himself a Round Peak musician due to the fact he was not raised or lived in Round Peak.  He told me this on several occasions.

Characteristics of Round Peak Music
Round Peak music is characterized by a distinctive interplay between the fiddle and the banjo. The fiddle is often tuned differently to play in specific keys, and often a short bowing style is used. Like the fiddle, the banjo is tuned differently to play in particular keys, and most often a fretless banjo is played. A fretless banjo is a banjo that does not have any frets. Most fretless banjos were originally fretted banjos, but the players pulled out the frets down to the seventh fret and placed a brass or copper plate from the nut to the seventh fret. This gave the banjo players access to a greater number of notes which enabled them to follow the fiddle player’s melody more precisely. Round Peak banjo players also used a lot of slide notes, which produces a bluesy sound. Also, Round Peak banjo players use the fifth string in place of noting the first string at the fifth fret to produce that note. The role of the guitar, mandolin and bass is basically for keeping rhythm while the banjo and fiddle play the melody of the tunes.
Music has always been dear to the heart of the Round Peak community, and continues to be to this day. 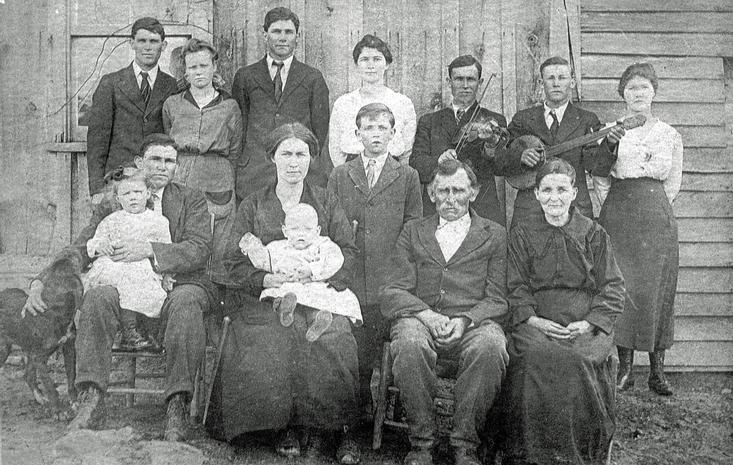 Click Here for a website I developed totally dedicated to Kyle Creed, "The Man and His Music"

The presence of musical instruments in this Lawson Family picture illustrates the importance of music in their lives.

This photo, circa 1918, is the family of my great-great-great grandpa and grandma Riley & Judith Lawson.